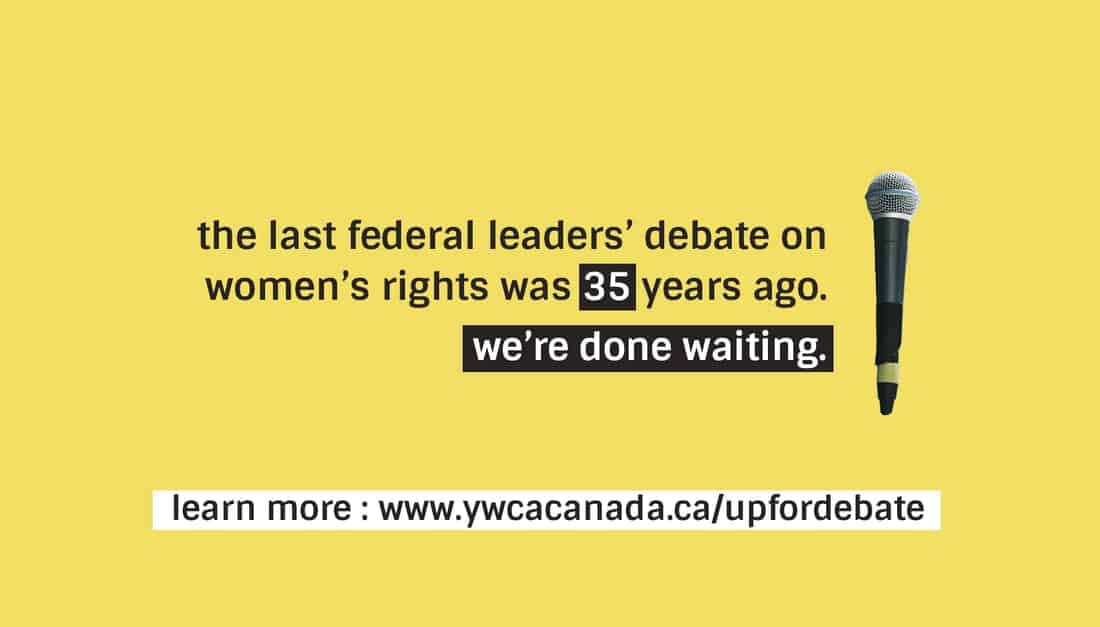 The 2019 federal election will soon be upon us and we want all federal party leaders to tell Canadians what their positions are on women’s and gender equality issues. WomanACT is proud to be a part of the Up For Debate 2019 alliance.

Up for Debate 2019 is a campaign coordinated by an alliance of women’s rights and gender equality advocates from across Canada.

The last Federal Leaders’ Debate on women’s issues in Canada was on August 14, 1984 – 35 years ago now. And yet, women, trans, non-binary, and two-spirit people in Canada still face many of the same barriers today, including:

During the 2019 federal election, the Up For Debate Alliance is calling on all federal party leaders to commit to a national televised debate to share their priorities on women’s rights and gender equality. Jagmeet Singh of the NDP and Elizabeth May of the Green Party have pledged to participate, but we’re still waiting on a commitment from the Liberals, the Conservatives, and the Bloc Québécois. When it comes time to elect our next government in 2019, we want party leaders to explain how they plan to build a more equitable Canada for all.

For information on the campaign or to sign our petition, please visit https://ywcacanada.ca/upfordebate/

Open Letter to All Toronto Mayoral and Council Candidates

Open Letter to All Toronto Mayoral and Council Candidates: We are a concerned group of non-profit organizations who are ringing the alarm bell on rising poverty and inequality in Toronto. […]

In recent decades, the number of women and gender diverse people in STEM-related fields has been increasing. These folks are making important discoveries and spearheading progress in their industries and […]